お久しぶり ですねー!
Well, it's been a long time since the last post I made.
And somehow, the time gap between each post I made is always more than 3-4 months, in which always ended up me opening my post with "It's been a long time bla bla bla" *sigh*
I wonder why it always takes a long time before I can post something in my journal.. Perhaps, it's because I'm pretending to be busy. But I think mostly it's because I don't know what topic should I write here. I've always wanted to write a fic to fill this lj, but then I think my writing skill is not that good and I'm a bit shy to publish it
In the end, all I can post about is always a random topic~~
But, well.. It's not that bad, ne? :D

Anyway, this time I will be writing about me and my best friends (the are 5 of us, but one couldn't came because of something..)
On the Saturday, July 19, the 4 of us spent the night staying over at my home. We did a lot of things, which consist of :
- Break fasting together (since it's Ramadhan);
- Going to the town park a.k.a Alun-alun ;
- Playing Babanuki;
- And of course, Exchanging files :D

And oh yeah, all of us are fangirls if you haven't noticed already.

It was very fun, you know?XD
We talked a lot about random topics, and there are even a serious topics.

And as I've said above, we went to the town park at night. We rode an Odong-odong *Google it if you want to know*, bought ice cream (and trump card), and of course taking selfies. :D

I said that we bought a set of trump card, and yes, we bought it to play Babanuki ;)
It was sooo fun! I don't know how many round we played Babanuki, but it was so fun. And what's the best is that never once did I lose! *proud*

And the next day, we woke up early to eat Sahur.
After that, we didn't go back to bed, but decided to go to the town park again at dawn time XD.
Well, we took some selfies there

By the way, we all love Arashi and the other JE groups, and all of us agree that somehow we have the same personalities as Arashi members. And yeah, the balloon we held was according to the colour of Arashi member we resemble XD.

I held the red one, because they said I am the most clever one, hehe >.<

arisa_ichi held the blue one, because she is quiet and somehow has this sleepy face just like Ohno's (and she is the oldest!)XD

yuririn_28 held the purple one, because she is a DoS, you know? And okay, she is also stylish :D

tegoainoo held the yellow one, because she is stingy a difficult person if she deals with the money, and she loves to tease us lol
And the green one actually should be held by Anita, because she is Baka and easily gets bullied XD cheerful, and yeah, the airheadedness is just the same as Aiba's XD

Lastly, we were exchanging files :D
And, you know what? That time,

arisa_ichi gave each of us a gift! (it was a late b'day gift, she gave us the gifts at the same time) 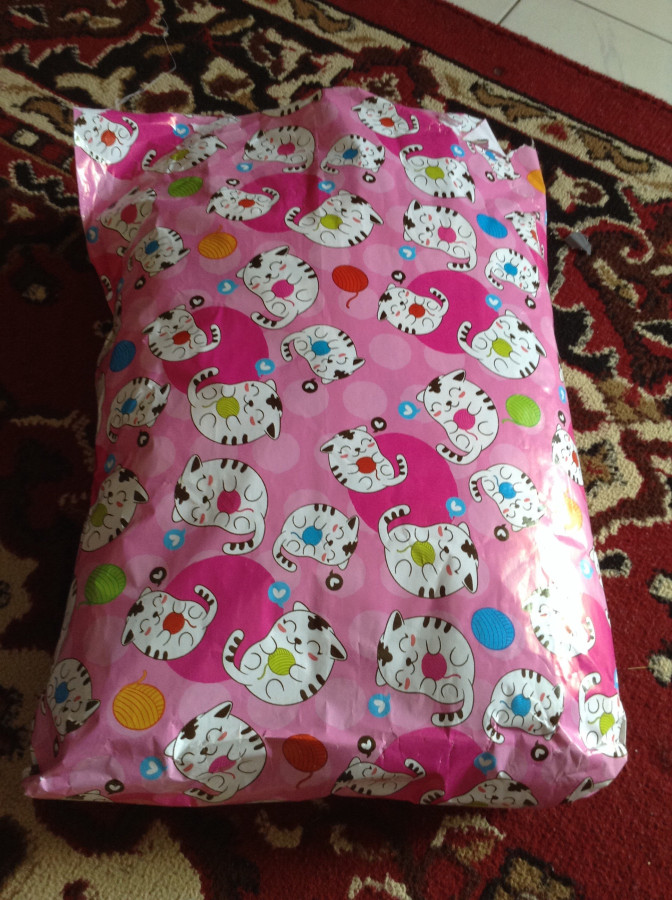 Ah~ We had so much fun that day <3
As expected, being together with your best friends is so great!
I hope, some day the 5 of us can gather like this, not only the 4 of us.
It would be really great if there are 5 of us!^o^

Yay~ Long time not posting something here, in my LJ :’D
Somehow, I miss writing something to be posted here, but then again, I’m a lazy girl (_ _’)
But, today, I’m back with something to post (well, it’s because I really want to join this competition), and I think, it will be my first time posting in Bahasa Indonesia, hehe.
And after this, I think should do more rambling on LJ in my native language. Why? Because I can pour anything without worrying any grammatical errors I probably made XD
Haha, well then, let’s just go to the main point of this post, which is about : NazoDi *slapped by Sho*, Okay, I mean Nazotoki wa Dinner no Ato de :D
I will talk about the dorama and and the novel (which will be published by @PenerbitHaru), so If you still want to read more, click the link below :
( Collapse )

P.S : I really hope I can have more free time to write posts and update my LJ as much as possible, but really, I can only pray because school gets in my way and it takes so many time from me :p. And moreover, my Mid-term semester is coming next week :’). But after it, I think I will have some times to leisurely enjoy my free week, because when my friends are on their trip to Bali, I will stay here in Pemalang. I’ve been there for several times already, and that’s why~ :D. While on that free week, I hope I can download as many videos as possible and be active on LJ to please my fangirl soul  XD (still with some tasks to do, of course :’D).

Ohisashiburi minna~!! (ι´О`ゞ)
It has been a while since the last time i updated my lj~
I've been so busy and i can hardly use my lappie since I'm in the Senior High School...
Oh god, every and each day is full of tasks, extraclasses, extracurriculars, and tests (leave alone the course i take..)
And even on the weekend, there are so many tasks who are waiting to be completed... (ノ´Д`)ノ

And today, it's the first day of Arashi Live Tour 『POPCORN』!!!
Well, there are so many tweets on twitter about Popcorn, and they all make me feel like "Aaaaa!! I want to go to Japan right now and watch the concert!!", but all I can do is to refresh my timeline and keep watching the tweets of Popcorn flooding it X'D
But, yeah, it's not as bad as I thought~ At least i can follow the whole concert from twitter X')
And of course, i got many report from the fans who are able to watch the concert through twitter, and there's one of them which successfully made me squeal (inside my heart though, i'm afraid that if i suddenly scream inside my house, my parents might think of something weird about me XD)
And there it is :

Uwaaah, I'm so exciting about this and I hope there will be a papapics <3 XD

Ah~ with just a single matsumiya flavour in this night, it can makes my whole day~☆
Sasuga my OTP XDD

And I also heard the other member-ai, such as Sakumiya and Juntoshi, hohoho~
PLUS i've seen the tracklist for today's concert, and I'm in love with whoever has arranged that tracklist <3
There are plenty of my favourite songs + they're coming in a row~ <3 Love love love~ >w<

Well, I think this is enough for today~
At least it helps me to relieve some stress out of my head and mind~XD
Hahaha

And for everyone : "HAPPY ARASHI'S POPCORN DAY~!!"
Let's get prepared for the following concert~>w<9

romaji_lyrics ( http://romaji-lyrics.livejournal.com/825361.html )
and the notation credit to me ^^
well, you know? i love to find the notation of Japanese songs XD
i've found Arashi's Happiness, Hatenai Sora, and Love So Sweet (well, just the reff XD) + Kat-Tun's Haruka na Yakusoku notation
it's not 100% accurate (well, if you want the accurate one, it's on the piano score... but you know? I don't know how to read a piano score/musical notes *?*  ;___;), so feel free to correct me if there is something wrong or kinda weird XDD

yeah, it's bean a long time since the last post i made XD
and yeah, for now, i'll post something unimportant again


hora hora, take a look please?XD
or you even want to give a like? then, please do it!XDD
hahaha XDDD
well, they did this with almost no-preparation, so please cheer them up~ XD yeaaaay~ 'o'//

okay then, mission to promote it has been cleared! 8D
jaa, see you next time~ *waving hand*

Yay yay yay~ <3
Haha XD
this time, i want to share some photos again XD *it's not pic spam though, because it's just 3 pics XD*. by the way, i'm sorry if almost all of my post are annoying, but really, i just want to do this ;_;
i hope you can understand..u_u
and, credit to whoever has posted these photos ^^

haha XD
forgive me for doing that XD
but really, i just want to share <3

Minna~!
lol, this entry, it's supposed to be posted 2 days ago XD
but, well, since i was too happy that day, and yesterday i was really busy, i just got to post it now XDD
( Collapse )

lol, let's get it to the point..
to be honest, i don't have anything GOOD to post about right now *though i have something I really want to talk about a week ago.., but yeah, just forget it.. T__T*

for now, i think i'll just posting some random images (which i found everywhere) <3 *lol*
I'm just sharing it and none of them are mine, the copyright goes to them who own the pics^^
So, let's just START~~~ :

Minna~
I'm really happy today, because the entrance exam for high school is over~XD
well, actually it ended yesterday, but I just want to post something right now *lol*

I will still have many more activities, but I think, once the exam over, I have many times to do what I want, sooo, I will just say that, my (not official) holiday starting today~!
*drum rolls* yaaay~ \('w'\)
Ahh~ I'm so excited right now!!XD

And~~~
Okay, this is so sudden, but I really want to share this pict of MatsuMiya~
lol lol~
well, I don't know how to make gif, so I just took a screencap~>w< See? see?? those hands are holding each other!! <3

you know? jun seemed to refuse Riida's hand, but he offered his hand to Nino <3
(and nino wholeheartedly held his hand)XDD
I think Nino didn't even want to let his J's hand~XD
uwaaa~ this is just doki doki XD

Oh yeah~
It's not because of anything so serious, like love or friendship...
but.. It's because of the entrance exam I did just now..TT^TT

the schedule for today exam is ICT and English..
Well, the english one is not a problem (although I may answered one question wrongly ._.)
but the ICT... it was just soooo.... MAKE ME FEEL REALLY BAD...T~T

it was all ESSAY and really.. It was the most difficult ICT question that I have ever had until now ._.

uwaa... I just can pray now T^T
I hope you will pray for me too XD Onegai~>/\
Collapse